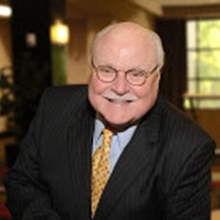 David Ashley White, Moores School of Music Professor of Composition, with degrees from the University of Houston (B.M. and M.M.) and the University of Texas at Austin (D.M.A.), served as Director of the Moores School from 1999-2014, during which time he held the Margaret M. Alkek and Margaret Alkek Williams Endowed Chair. His secular and sacred compositions are widely performed and published, and he has received numerous commissions from various organizations, schools, churches and individuals. His vocal and instrumental music is recorded on several commercial labels, including Zephyr—Echoes from the American Cathedral, a selection of White’s sacred music, sung by the St. Paul’s Choir, Houston, and The Blue Estuaries, performed by the Houston Chamber Choir. On the Gothic label is Praise the Spirit, sung by the Palmer Church Choir, Houston, containing a number of White’s anthems, motets, service music, and hymns. As you set out for Ithaka, published on the Albany label, contains a selection of his secular music, performed by students and faculty from the Moores School.

White’s hymns are found in a number of denominational books, including the Episcopal Church’s The Hymnal 1982 and its supplement, Wonder, Love, and Praise; The United Methodist Hymnal and its supplement, The Faith We Sing; the United Church of Christ in Japan; Great Britain’s Worship Songs Ancient and Modern, and the recently published Glory to God: The Presbyterian Hymnal (2013). Four volumes of his hymns are published by Selah Publishing Co., most recently I’ll Sing and Joyful Be (2014).

A seventh-generation Texan, White is an active member of the Houston arts community, serving on boards that include a mayoral appointment to the Houston Arts Alliance. He has recently been appointed composer-in-residence at Palmer Memorial Episcopal Church in Houston, his home parish. In addition, he has been designated the Distinguished Composer by the American Guild of Organists for its upcoming national convention to be held in Houston in 2016, where his anthem, With a Shining Like the Sun for mixed chorus, brass, timpani, organ and congregation, will be premiered. In January 2015, he was awarded the Raabe Prize for Excellence in Sacred Composition for his work, Spirit Moving over Chaos, and in April 2015, he received the Esther Farfel Award from the University of Houston, the university’s highest honor in recognition of overall career excellence.

Anthem With a Shining like the Sun will be performed Sunday, June 19, Opening Convocation, St. Martin's Episcopal Church.