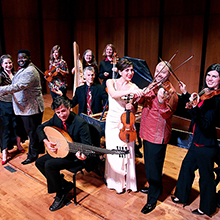 Founded in 1998 by harpsichordist and conductor Matthew Dirst, Ars Lyrica Houston presents a diverse array of music from the 17th and 18th centuries on period instruments. Its local subscription series, according to the Houston Chronicle, “sets the agenda” for early music in Houston and it also appears regularly at major festivals and conferences, including the 2014 Berkeley Early Music Festival & Exhibition. Ars Lyrica’s distinctive programming favors Baroque dramatic and chamber works, and its pioneering efforts have won international acclaim: the ensemble’s world première recording of Johann Adolf Hasse’s Marc’Antonio e Cleopatra, hailed by Early Music America as “a thrilling performance that glows in its quieter moments and sparkles with vitality,” was nominated for a Grammy Award® for Best Opera 2011. Both the Hasse recording and Ars Lyrica’s recording of Domenico Scarlatti’s comic intermezzo La Dirindina feature 2013 Cardiff Singer of the World Jamie Barton, who returns for a program with the ensemble during the 2015/16 season. Details about Ars Lyrica’s latest recordings and upcoming programs can be found at www.arslyricahouston.org.

Ars Lyrica Founder & Artistic Director Matthew Dirst is the first American musician to win major international prizes in both organ and harpsichord, including the American Guild of Organists National Young Artist Competition (1990) and the Warsaw International Harpsichord Competition (1993). Widely admired for his stylish playing and conducting, the Dallas Morning News recently praised his “clear and evocative conducting” of Handel’s Alexander’s Feast, which “yielded a performance as irresistibly lively as it was stylish.” Dirst’s recordings with Ars Lyrica have earned a Grammy nomination and widespread critical acclaim. His degrees include a PhD in musicology from Stanford University and the prix de virtuosité in both organ and harpsichord from the Conservatoire National de Reuil-Malmaison, France, where he spent two years as a Fulbright scholar. Equally active as a scholar and as an organist, Dirst is Professor of Music at the Moores School of Music, University of Houston, and Organist at St Philip Presbyterian Church in Houston. His book Engaging Bach: The Keyboard Legacy from Marpurg to Mendelssohn was published by Cambridge University Press in 2012. He is also the editor of Bach and the Organ, which appears in the Bach Perspectives series from the University of Illinois Press in early 2016.

Praised for her “lively personality, abundant charm, and luscious vocalism” (Chicago Tribune), and “warm, agile soprano” (Chicago Classical Review), soprano Erica Schuller is a versatile performer, bringing committed artistry to a broad musical repertory. Her particular affinity for Baroque repertoire has brought her increasing attention from some of the country’s finest Early Music ensembles. She has performed leading and supporting roles with the Boston Early Music Festival, the Haymarket Opera Company, the Florentine Opera Company, Opera Siam (Bangkok) and Skylight Opera Theatre, among others. As a concert soloist, Ms. Schuller has appeared with Great Lakes Baroque, the Milwaukee Symphony Orchestra, the Elgin Symphony Orchestra, the San Francisco Chamber Orchestra, the San Francisco Bach Choir and Second City Musick Baroque Ensemble. She holds degrees from The Eastman School of Music and The San Francisco Conservatory of Music, and currently resides in Chicago.