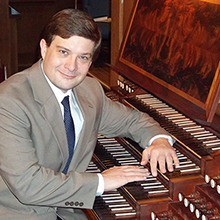 Aaron David Miller is noted for his highly imaginative and creative style, found in his performances, improvisations, and compositions. He has won prizes at several prestigious competitions, including the top prize at the AGO National Improvisation Competition, and the Bach and Improvisation prizes at the Calgary International Organ Festival Competition. Recently he was invited to be among the performers for a special tenth anniversary performance of the Rosales organ in Los Angeles’ Disney Hall and to accompany a silent film for the new Kaufmann Center for Arts in Kansas City. He was invited to perform for the 100th anniversary of the Spreckels Organ (Balboa Park, San Diego) and was commissioned to write a new piece for the occasion.

A prolific composer, many of Dr. Miller’s compositions have won critical acclaim. Featured prominently at the 2006 AGO National Convention in Chicago, Dr. Miller’s work for organ and orchestra, Sleepy Hollow, was premiered at Symphony Hall. Dr. Miller’s many organ, choral, and orchestral compositions are published by Augsburg Fortress, Oxford University Press, Paraclete Press, ECS, Morning Star and Kjos Publishing House. He has recorded two CDs, the first, showcasing his performances of Bach and his improvisatory skills on the Dulcian label and a new CD on his own label titled Clamor, featuring his own compositions.

Aaron Miller’s degrees are from the Eastman School of Music, and the Manhattan School of Music. He serves as the Director of Music and Organist at The House of Hope Presbyterian Church in St. Paul, MN, and is a forensic musicologist for Donato Music in Scarsdale, NY. He is represented by Penny Lorenz Artist Management.