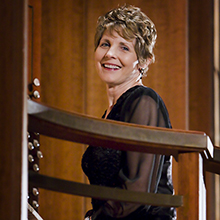 Mary Preston is the Resident Organist and Principal/Lay Family Chair with the Dallas Symphony. She also serves as Organist and Choirmaster at St. John’s Episcopal Church and School in Dallas. Mary has been presented in recital throughout the U.S., Europe and Asia to audiences responding with enthusiasm and excitement. She has been a featured artist for numerous American Guild of Organists national and regional conventions. Along with performing concerti and other major works with the Dallas Symphony, she has performed with the L.A. Philharmonic, the Chicago Symphony Orchestra, Denver, East Texas and others orchestras. She performed the world premiere of Poul Ruders’ Organ Symphony No. 4 and the Guilmant and Saint-Saëns organ symphonies with the DSO, and continues to perform and record with the Dallas Wind Symphony as well. Her recordings are produced on the Reference, Gothic and Naxos labels, and are met with rave reviews. She and her husband Joe have been married for forty-five years.