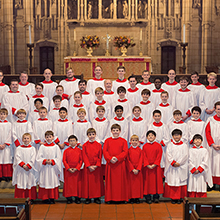 The Saint Thomas Choir of Men and Boys is considered by many to be the leading ensemble in the Anglican choral tradition in the United States. The choir performs regularly with the period instrument ensemble, Concert Royal, and with the Orchestra of St. Luke's as part of its own concert series. Its primary raison d'être, however, is to provide music for five choral services each week. Live webcasts of all choral services and further information including recordings of the choir may be found at www.SaintThomasChurch.org.

Supplementing its choral services and concert series over the past three decades, the choir has toured throughout the U.S. and Europe with performances at Westminster Abbey and St. Paul's Cathedral in London, Kings College, Cambridge, Windsor, Edinburgh, St. Albans, and the Aldeburgh Festival. In 2004, the choir toured Italy, and performed for a Papal Mass at the Vatican. During 2007, the choir performed Bach’s Saint Matthew Passion for the opening concert of the Mexico Festival in Mexico City as well as at Saint Thomas Church. In February 2012, the boys of the choir traveled to Dresden to give the premiere of Lera Auerbach's Dresden Requiem with the Dresden Staatskapelle in the Frauenkirche and Semperoper. Later in 2012, the choir was invited to perform in the Thomaskircheat the Leipzig BachFest, a highlight of their June 2012 tour to Germany and Copenhagen.

In addition to the annual performances of Handel’s Messiah, concerts at Saint Thomas have included requiems by Fauré, Brahms, Mozart, Duruflé and Howells; Bach’s Passions and Mass in B Minor; the Monteverdi Vespers of 1610; a Henry Purcell anniversary concert;Rachmaninoff Vespers; the U.S. premiere of John Tavener’s Mass; a concert of American composers featuring works by Bernstein and Copland and a composition by Saint Thomas chorister, Daniel Castellanos; the world premiere of Scott Eyerly’s Spires and a concert of music by Benjamin Britten.

The men of the Saint Thomas Choir are professional singers; the boy choristers attend Saint Thomas Choir School. Founded in 1919, it is the only church related boarding choir school in the United States, and one of only a few choir schools remaining in the world. The Choir School offers a challenging pre-preparatory curriculum, interscholastic sports, and musical training for boys in grades three through eight. The Choir School is committed to training and educating talented musicians without regard to religious, economic, or social background. Choristers are sought from all regions of the country. Details of admissions procedures and audition requirements are available at www.ChoirSchool.org The Saint Thomas Choir is represented by Karen McFarlane Artists, Inc.

Benjamin Sheen, Acting Director of Music at Saint Thomas Church in New York City, is one of the UK’s brightest young organists. Hailed as a "brilliant organist" by the New York Times, he is the 2013 winner of the Pierre S. du Pont First Prize in the inaugural Longwood Gardens Organ Competition and he received Second Prize and the Jon Laukvik prize at the St. Alban’s International Organ Competition in 2013. He holds degrees from the University of Oxford and the Juilliard School; he is also a prize-winning Fellow of the Royal College of Organists and the 2011 recipient of the Worshipful Company of Musicians’ Silver Medal. As a concert organist, Mr. Sheen has performed throughout Europe, the US, Canada, and Australia and also recently made his solo debut in Singapore. He has performed with notable orchestras including the Royal Philharmonic Orchestra and the City of London Sinfonia, and he has appeared on BBC radio and television several times. Recent highlights have included several complete performances of J. S. Bach’s ClavierÜbung III, including live on New York’s classical radio station WQXR in November 2014. For more information and upcoming performances, please see www.bensheen.com. Mr. Sheen is exclusively represented in North America and Canada by Phillip Truckenbrod Concert Artists.

Stephen Buzard is currently the Acting Organist at Saint Thomas Church, Fifth Avenue, where he is primarily responsible for accompanying the choir and playing services. He has served as Assistant Organist at Saint Thomas since 2013, accompanying and assisting John Scott until his untimely passing in August. Mr. Buzard holds a Master of Music degree from the Yale Institute of Sacred Music where he studied organ with Thomas Murray and improvisation with Jeffrey Brillhart. While at Yale, Mr. Buzard served as organ scholar at Trinity on the Green, New Haven, CT; as principal organist of Berkeley Divinity School at Yale University; and as organist for Marquand Chapel, Yale Divinity School. Mr. Buzard earned his Bachelor of Music from Westminster Choir College in 2010 where he studied organ with virtuoso, Ken Cowan.

While an undergraduate, Mr. Buzard was concurrently organ scholar at Trinity Episcopal Church, Princeton, NJ, and Director of Music for the Episcopal Church at Princeton University. Before starting at Yale, Mr. Buzard spent a year in England as Senior Organ Scholar of Wells Cathedral where he accompanied and conducted daily services and assisted in the training of the boy and girl choristers. He was the winner of the 2010 Arthur Poister Competition and the 2009 Joan Lippincott Competition for Excellence in Organ Performance. Mr. Buzard is an Associate of the American Guild of Organists.

In addition to his church work, Mr. Buzard keeps an active solo recital schedule. His recording “In Light or Darkness,” available through Delos Records, has received wide critical acclaim. A review for The Diapason wrote: “Buzard paints the color and shape of every phrase with a maturity belying his youthfulness... If this level of skill doesn't dazzle you, then I do not know what will.” For more information, please visit www.stephenbuzard.com.