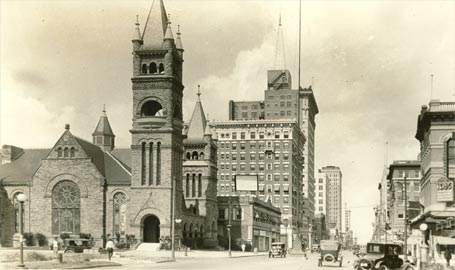 It was often feast or famine for Houston organists in the city’s early history. The city dated only from 1836, and its church structures and pipe organs were introduced only in the late 19th century. At First Presbyterian Church, Patricio Gutierrez, one of the city’s most “polished musicians,” reported hazardous playing conditions for his organ installation. He reported that “the drafts sweep up from the bellows mechanism of the organ, down under the pedal bars, and the result has been the flu and one cold after another for the last 12 years.” With the busy wedding season approaching, Gutierrez “evolved a defense. When he mounts the organ loft, his feet will be muffled in thick, athlete’s socks, and his pants will be clipped to his ankles with a couple of red bicycle guards.” 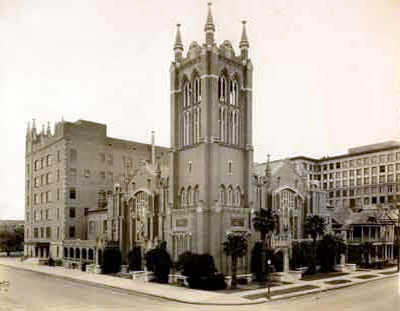 Down the street at First Methodist Church, however, it was not cold but heat which threatened successful music performance. A new organ had been purchased in 1892, and the organist was being paid $25 per month. By 1897, church records revealed that the “organ was being ruined and the choir was suffering from excessive heat because the organ chambers and choir loft were built directly over the furnace room” in the basement. “The matter needs investigation to devise some means of preventing injury to the organ and make it more comfortable for the choir because the heat comes in direct contact with the pine flooring in the loft.” A year passed before a remedy was finally attempted. On another front in 1902, the church records read, “It was deemed wise that the organist and choir be asked not to let the music drag.” Months later, an effort to buy a water “motor” for the organ was deferred, and an allowance of $1.50 per Sunday was budgeted for “pumping the organ.” As late as 1911, however, Methodist choristers were still complaining that “the heat is intense in the choir loft.”

Some things never seem to change!