A popular form of aristocratic entertainment in mid-eighteenth-century London was to stroll round the city’s ornamental pleasure gardens, both those at Vauxhall (launched in 1732 with a masked gala) and its more fashionable rival, Ranelagh Gardens (opened in 1742 and now the site of the annual Chelsea Flower Show). For two shillings and sixpence, patrons at Ranelagh could escape the squalor of the city streets to promenade around the ornamental lake and manicured walkways, watch masquerades, marvel at the Chinese Pavilion and firework displays, enjoy the fountains and street entertainers, and, in its shadier corners, perhaps indulge in a romantic assignation or two (it was, Edward Gibbon wrote, ‘the most convenient place for courtships of every kind’). 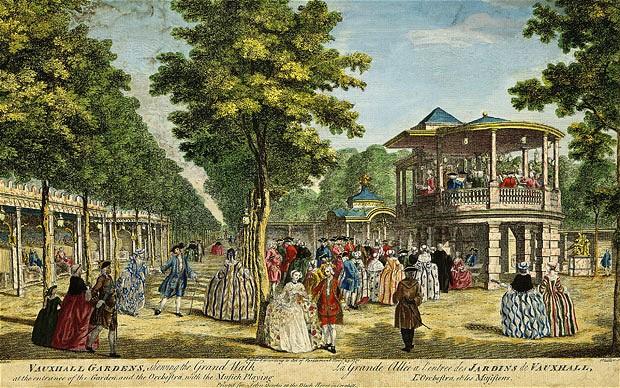 Central to the entertainment at these pleasure gardens was musical performance. In April 1749 Handel’s Music for the Royal Fireworks was rehearsed at Vauxhall Gardens; such was the attendant throng (some 12,000 people) that the central arch of the newly built London Bridge collapsed, causing a three-hour traffic jam of carriages. At Ranelagh concerts took place in the magnificent rococo rotunda, which measured 120 feet across and in winter was lit and heated by enormous fireplaces built into its main support. In June 1765 patrons were dazzled by the virtuosity of the nine-year-old Mozart, who performed some of his own keyboard compositions.

More typical musical entertainment was orchestral music, consisting of dances and the sort of interval music commonly heard at London theatres, and a vast array of songs and ballads — tuneful, easy on the ear, but mostly instantly forgotten and barely lasting from one season to the next. Much of the music performed at the gardens was written by contemporary British composers such as Thomas Arne, Henry Heron, Starling Goodwin and his son William, and James Hook. Hook alone wrote over 2000 songs for performance at the gardens at Marylebone and Vauxhall, the most famous of which was ‘Sweet Lass of Richmond Hill’.

At the larger pleasure gardens there was also, strange as it may seem to us now, the post of Organist, occupied by many of the leading players of the day, who served at major London churches on Sundays and entertained a more secular audience at the gardens during the week. Yet this is perhaps not so surprising; the organ music of these composers has a strong affinity with much early and mid-eighteenth-century instrumental music — attractive melodies, clear harmonies, sequences, and strong progressions — and as such is instantly pleasing and appealing. While organs on the continent at this time were developing into mighty machines of great sophistication with pedalboards, several manuals, and a considerable numbers of stops, the English organ was a much more modest affair and invariably without pedals. Taking advantage of this, and perhaps aiming for the widest possible market, many contemporary collections were advertised as suitable for organ or harpsichord or pianoforte, and the music therefore met the demands of both church and home.

And so a string of English composers created a repertoire of instantly attractive keyboard music that was tuneful, expressive, and full of grace and charm. This music delighted eighteenth-century audiences, as they walked and admired the pleasure gardens of London; it can equally entertain us some 250 years later.

David Blackwell is a freelance writer, music editor, composer, and arranger. A selection of the music discussed is newly published by OUP in 18th-century English Organ Music: A Graded Anthology, in four volumes (1, 2, 3, 4), compiled and edited by David Patrick. David Patrick is firmly established himself as a recital organist, accompanist (organ, harpsichord, and piano), and conductor throughout the UK and Europe.