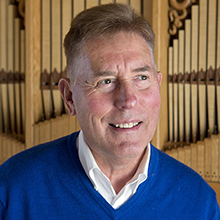 David P. Dahl is Professor of Music and University Organist Emeritus from Pacific Lutheran University, Tacoma, WA, retiring in 2000 after thirty-five years of teaching. In August, 2010, he retired as Director Emeritus of Music Ministries at Christ Episcopal Church, Tacoma, where served for forty years. During his career he has been an active recitalist, including performances for national conventions of the American Guild of Organists and the Organ Historical Society. Dahl has been a consultant for several organ projects in churches and academic institutions. He has been an active supporter of high quality organ building, especially encased mechanical action organs, both historic and newly built. Dahl has traveled extensively in Europe on tours of historic organs. He is a published composer of organ music through Augsburg-Fortress Press and Morning Star Music, the more recent of which include An American Suite for Organ, and The Organ Sings. He has been awarded the Distinguished Service Award from the Organ Historical Society, and the Distinguished Alumnus Award from Pacific Lutheran University.

Chorale Prelude on DUNEDIN will be performed Monday, June 20, 2 PM and 4 PM at Christ Church Cathedral.