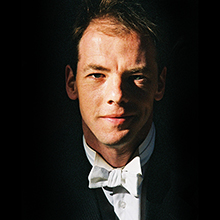 David Goode has been Organist at Eton College since 2005, combining this post with a flourishing performing career. A former student at Eton, and subsequently organ scholar at King’s College, Cambridge, he worked as Sub-Organist at Christ Church, Oxford from 1996-2001, during which time he won major prizes at the 1997 St. Alban’s and 1998 Calgary international competitions. From 2003-2005 he was Organist in Residence at First Congregational Church of Los Angeles.

He has concertized internationally since 1998, with a notably regular presence at the BBC Promenade Concerts in London. In the US he has played in many venues including the Walt Disney Concert Hall in Los Angeles, Spivey Hall in Atlanta, Wiedemann Hall in Wichita, KS, and Rice University in Houston. He has appeared as a soloist with several of the UK’s top orchestras, including the London Philharmonic under Kurt Masur; he also has a regular partnership with noted British trumpeter Alison Balsom, performing in the gala re-opening concert of the Royal Festival Hall organ in 2014. Of his 2013 Bach disc from Germany, The London Times said: "One of Britain’s finest organists puts the 1714 organ in Freiberg Cathedral through its paces . . . an exemplary introduction"; he is now recording the complete works of Bach for Signum Records. He is also known for his Reger recordings (with five CDs of a projected complete series now released), and his performances of new British music.

He is much in demand as a teacher of the next generation of organists (including recent masterclasses for the RCO and Oxford University), writes for Choir and Organ magazine, and has also recently developed a profile as a composer of church music, with a CD of anthems just released and his Blitz Requiem broadcast on Classic FM in 2013. He is represented by Karen McFarlane Artists.

Her symphonic works have been performed in the US, Latin America, and Europe, and are frequently performed by the Pittsburgh Symphony Orchestra, including premieres led by Gennady Rozhdetsvensky, Mariss Jansons, and Donald Runnicles. Both her instrumental and choral compositions appear on numerous recordings, including seven anthologies.

The composer is also an accomplished pianist and organist and is currently the organist at Christ Lutheran Church in Millvale, PA, where she also assumed the position of choir director. She has composed numerous sacred choral anthems and organ works for her church.

Nancy Galbraith is published by Subito Music in Verona, NJ. Learn more on her website at nancygalbraith.com.

*From the Bayoubüchlein, commissioned by Houston AGO 2016