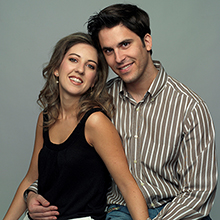 Spanish organist Raúl Prieto Ramírez is known to the American organ audience from his appearance four years ago at the 2012 AGO national convention and from his widespread performances in the United States. He teaches at Ball State University in Muncie, IN and was a student of German organist Ludger Lohmann.

In Dúo MusArt–Barcelona he joins his wife, pianist Maria Teresa Sierra, in an organ and piano performance team that has experienced growing popularity at home in Spain as well as elsewhere in Europe. She is a graduate of the St. Petersburg Conservatory in Russia. The duo has recorded for the Brilliant Classics label, and made its American debut at the Methuen Music Hall in Massachusetts.