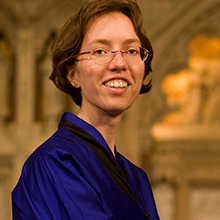 A native of Quebec, Isabelle Demers has established herself as one of the most sought-after musicians of her generation. She has been hailed as a "musician's musician," a "diminutive dynamo" with vehement virtuosity. Critics and audiences have praised her special feel for registration and her idiosyncratic exploitation of the organ's resources. Her programs, performed entirely from memory, have received rave reviews in leading organ magazines and newspapers such as the New York Times and the Chicago Tribune.

She has toured extensively in North America, Australia, New Zealand, and in Europe. Recent engagements include the cathedrals of Cologne and Regensburg in Germany, St. Paul's Cathedral and the Royal Festival Hall in London, as well as major universities and concert halls in the US, among them Davies Hall (San Francisco), Disney Hall (Los Angeles), the Kimmel Center (Philadelphia), Yale University, the University of Chicago, and the Eastman School of Music. She has also been a featured performer at many national and regional conventions of the American Guild of Organists, at national conventions of the Royal Canadian College of Organists, as well as at conventions of the Organ Historical Society and of the International Society of Organbuilders. She has a special fondness for transcriptions and for the music of German composers, among them J.S. Bach and Max Reger.

Dr. Demers holds the Bachelor of Music in piano and organ from Le Conservatoire de Musique de Montréal, as well as Master of Music and Doctor of Musical Arts from the Juilliard School, where she studied with Paul Jacobs. Her doctoral work on Bach's St. John's Passion received the Richard French Prize for best dissertation at commencement. She is Assistant Professor of Organ at Baylor University, where she teaches applied organ and other courses in the organ curriculum. She is represented by Phillip Truckenbrod Concert Artists.

Michael N. Jacobson is Professor of Saxophone and Associate Dean for Operations at Baylor University School of Music. He was Director of Jazz Studies and Assistant Professor of Saxophone at Mansfield University in Pennsylvania from 1980-1984. He is past president of the North American Saxophone Alliance and he also acted as Region 4 Director. Currently, he is the Texas Coordinator for the NAWPI. He holds degrees from Arizona State University (BM), Indiana University (MM), and the University of Texas at Austin (DMA). Indiana University also awarded him their prestigious Performer’s Certificate. His recording of John Harbison’s San Antonio, issued in 1999 on the AUR label, was a first round Grammy Award nominee in the category “Best Instrumental Solo Performance without Orchestra.” Dr. Jacobson has also made recordings on Equilibrium, and AUR, RonCorp; his Mixed Company CD is available on iTunes. He is an active Artist/Clinician for the Yamaha Corporation, D’Addario Rico Reeds, and a former clinician for the MakeMusic Corporation with both Finale and SmartMusic software. He has published in the Saxophone Symposium, Saxophone Journal, and also authored a music technology column in Jazz Player magazine.

Luke Mayernik is an internationally acclaimed and award winning composer/organist.

Highlights of his career include winning First Prize for the AGO National Competition in Organ Improvisation (2004), and First Prize for the International Organ Improvisation Competition hosted by the Royal Canadian College of Organists (2008). Mayernik also received a Pulitzer Prize nomination. He is an Associate of the AGO and has been honored by the Royal Academy of Music in Split, Croatia. His international awards in composition include the bronze (2011) and gold medals (2012 and 2013) at CROPATRIA Sacred Music Festival, Croatia.