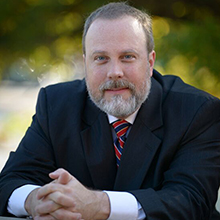 Joby Bell brings to his performances a contagious affability and a keen sensitivity to an audience’s increased appreciation for organ music. His recital programming demonstrates a varied and interesting repertoire, always enhanced by illuminating program notes. His acclaimed blog at www.JobyBell.org deals with a comprehensive range of organ-related topics including teaching philosophies, recital preparation, church music, and professional concerns.

He garnered Second Prize and the Audience Prize in the 2000 NYACOP. He has served the AGO in several capacities, including various offices for the Houston Chapter, dean of the Boone (N.C.) chapter, and NYACOP chair. Since 2004, he has served on the faculty of the Hayes School of Music, Appalachian State University, where he teaches organ and church music studies. His teaching specializes in practice techniques, memorization, service playing, choral accompanying, and maintaining grace under pressure – a lesson he maintains is always best taught by example.

He has released several recordings. Recent projects include two Widor Symphonies recorded at the Cathedral Church of St. Mark in Shreveport, and masterworks by Reubke, Brahms, and Jongen, recorded at First Baptist Church, Longview, Tex.

Joby Bell attended high school at the [University of] North Carolina School of the Arts, where he studied piano with Marian Hahn and Robert McDonald. He earned the Bachelor of Music degree in organ and piano from Appalachian State University and the Master of Music and Doctor of Musical Arts degrees in organ from Rice University. His teachers include H. Max Smith and Clyde Holloway, organ, and Rodney Reynerson and Allen Kindt, piano. His church posts in Houston included St. John the Divine (Episcopal), St. Philip Presbyterian, and First Presbyterian.

Ivan Božičević is a Croatian composer, organist, pianist, arranger, and jazz musician. He studied composition at the Belgrade Faculty of Music and attended the Summer Courses for New Music in Darmstadt. He also studied organ at the Frankfurt Music Academy and specialized in early organ music at Salamanca University.

His opus encompasses four symphonic compositions, orchestral, chamber, choral and solo works, as well as numerous electronic compositions. He is interested in a variety of genres (early and baroque, electronic, jazz, world music) and the possibility of “cross-fertilizations“ between those genres, always aiming for the stylistic amalgamation on a deeper level. His works are performed all over Europe, in Russia, and the US. Numerous recordings were made for Serbian national radio and television, Swedish national radio, and Croatian national radio and television.

Božičević received composition prizes in Serbia, Croatia, the Czech Republic, Bulgaria, the United Kingdom, and the US, including the ArtsLink Fellowship Award, Garth Newel Prize, Aliénor Award, AGO/ECS Publishing Award, Prague Philharmonic Choir Prize, John Clare Society Award, Asylum Quartet Prize, and Sofia Soloists Award. He is one of the founding members of the Splithesis ensemble for new music in Split, Croatia. More information may be found at http://www.ivanbozicevic.com and http://myspace.com/ivanbozicevic.

*Winner of the 2016 Marilyn Mason Award in Organ Composition