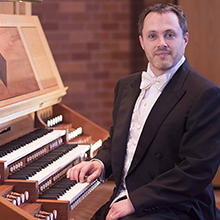 John D. Schwandt is Associate Professor of Organ and Director of the American Organ Institute (AOI) at the University of Oklahoma School of Music. He is a nationally acclaimed performer and is in demand as a clinician, recitalist, leader of hymn festivals, silent film accompanist and as an organ consultant. Dr. Schwandt has been a featured performer for the AGO, the American Theatre Organ Society, and the Organ Historical Society. He has been featured numerous times on American Public Media’s Pipedreams broadcasts. Equally at home on a classical or theatrical pipe organ, he is known for his musical versatility and ability to excite and engage audiences of every kind.

Prior to Dr. Schwandt’s 2006 Oklahoma University appointment, he was Assistant Professor of Organ and Curator of Organs at Indiana University. In 2006, he founded the American Organ Institute (AOI) to preserve the unique American characteristics of the pipe organ. The program includes not only the established classical repertoire, but emphasizes skills such as improvisation, liturgical organ playing and broad musical flexibility, particularly as it is applied to the accompaniment of silent films and the performance of theatrical organ music. The AOI is also the only program in America that possesses a fully-equipped pipe organ workshop capable of building, maintaining and restoring instruments. It functions in part as a laboratory for a new curriculum of organ technology courses. Thus, at the AOI it is possible to major not only in performance, but in church music or organ technology. The addition of an emphasis in theatrical organ is currently in development. Students of Dr. Schwandt have recently won the Poister, Rodland, Schweitzer, and Manz Competitions and the AGO's National Competition in Organ Improvisation.

Dr. Schwandt’s teachers have included George Damp, John Ferguson, and Larry Smith. He received first prize in the 1998 NCOI in Denver. He is represented by Mercury Artists.