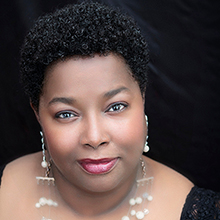 American soprano Melissa Givens moves and excites audiences and critics alike with a rich, powerful tone, crystalline clarity, and intelligent musical interpretations. Especially noted for her expressiveness and elegance on the stage, she’s been hailed as a singer whose music making is “consistently rewarding” and “a pleasure to hear” [Houston Chronicle]. Givens is also an extremely versatile artist, regularly performing repertoire from the Baroque era through music of the 21st century. An Early Music America review of her performance in the 2011 Boston Early Music Festival Fringe Concerts praised her voice as “beautiful and rich, [singing] Baroque music with conviction.”

A writer for Classical Net marveled, “Melissa Givens has a voice you imagine coming from the goddess Erda” in a review of Sing Freedom!, Conspirare’s 2012 recording of spirituals on the Harmonia Mundi label. Givens most recently appeared as the Soprano II soloist in Bach’s B Minor Mass with the Boulder Bach Festival. Other recent performances include Mendelssohn’s rarely heard solo cantata Infelice with Symphony North, the title role in Purcell’s Dido and Aeneas with Camerata Ventapane and the Baroque Music Festival of San Miguel de Allende, and Handel’s Israel in Egypt with the Houston Symphony. Givens also toured Europe and Africa in Pitié!, an adaptation of Bach’s St. Matthew Passion, with the Belgian dance collective Les Ballets C de la B. She can be heard on the soundtrack recording on Cypres Records and is featured in a documentary film about the tour by ZDF/Arté.

She remains in demand on concert series throughout the United States and internationally, including recent recitals in Georgia, the Democratic Republic of the Congo, and back home in Houston. A champion of collaborative musical endeavors, she performs with various chamber music groups, including Conspirare: Craig Hella Johnson and Company of Voices, the 2015 Grammy© Award recipient for Best Choral Performance, and Grammy© nominated Ars Lyrica Houston. Her solo appearances on major label releases from both groups have received enthusiastic reviews and she can also be heard on her solo CD, let the rain kiss you.